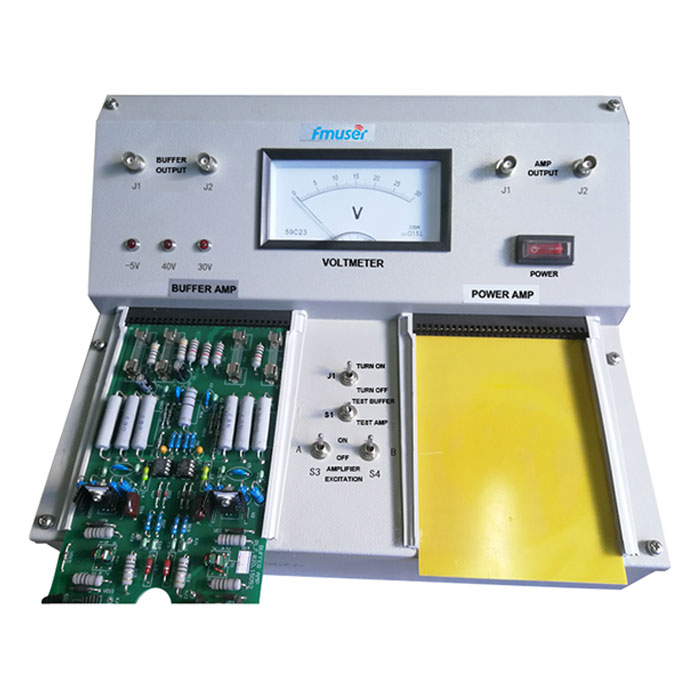 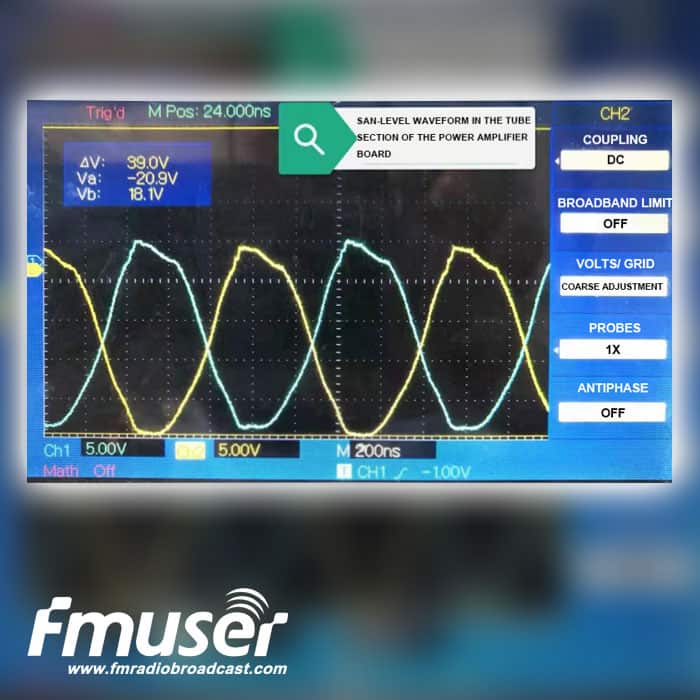 RF Power Amplifier Board Testing | AM Commissioning Solution from FMUSER

RF power amplifiers and buffer amplifiers are the most important parts of AM transmitters and always play a key role in early design, delivery, and post-maintenance.

These basic components enable the correct transmission of RF signals. Depending on the power level and the strength required by the receiver to identify and decode the signal, any damage can leave broadcast transmitters with signal distortion, reduced power consumption, and more.

For the later overhaul and maintenance of the core components of broadcast transmitters, some important testing equipment is essential. FMUSER's RF measurement solution helps you to verify your design through unparalleled RF measurement performance.

RF Power Amplifier: What it is and How it Works?

In the radio field, an RF power amplifier (RF PA), or radio frequency power amplifier is a common electronic device used to amplify and output input content, which is often expressed as voltage or power, while the RF power amplifier's function is to raise the things it "absorbs" to a certain level and "export it to the outside world."

The significance of the RF power amplifier is to obtain a sufficiently large RF output power. This is because, first of all, in the front-end circuit of the transmitter, after the audio signal is input from the audio source device through the data line, it will be converted into a very weak RF signal through modulation, but these weak signals are not enough to meet the large-scale broadcast coverage. Therefore, these RF modulated signals go through a series of amplification (buffer stage, intermediate amplification stage, final power amplification stage) through the RF power amplifier until it is amplified to sufficient power and then passed through the matching network. Finally, it can be fed to the antenna and radiated out.

For receiver operation, the transceiver or transmitter-receiver unit can have an internal or external transmit/receive (T/R) switch. The job of the T/R switch is to switch the antenna to the transmitter or receiver as needed.

What is the Basic Structure of an RF Power Amplifier?

Usually, in the RF power amplifier, the fundamental frequency or a certain harmonic can be selected by the LC resonant circuit to achieve distortion-free amplification. In addition to this, the harmonic components in the output should be as small as possible to avoid interference with other channels.

Ideally, the antenna and feed line combination will present a purely resistive impedance at the operating frequency.

Why RF Power Amplifier is Necessary?

As the main part of the transmitting system, the importance of the RF power amplifier is self-evident. We all know that a professional broadcast transmitter often includes the following parts:

If the amplifier can have good performance, then it can contribute more, which reflects its own "value", but if there are certain problems with the amplifier, then after starting to work or working for a period of time, not only can it no longer Provide any "contribution", but there may be some unexpected "shocks". Such "shocks" are disastrous for the outside world or the amplifier itself.

Buffer amplifier: What it is and How it Works?

Buffer amplifiers are used in AM transmitters.

According to Wikipedia, a buffer amplifier is an amplifier that provides electrical impedance conversion from one circuit to another in order to protect the signal source from any current (or voltage, for a current buffer) that the load may produce.

The main oscillator in an AM transmitter produces a stable sub-harmonic carrier frequency. The crystal oscillator is used to generate this stable sub-harmonic oscillation. After that, the frequency is increased to the desired value by means of a harmonic generator. The carrier frequency should be very stable. Any change in this frequency can cause interference to other transmitting stations. As a result, the receiver will accept programs from multiple transmitters.

RF Power Amplifier Test Bench: What it is and How it Works

The term "test bench" uses a hardware description language in digital design to describe the test code that instantiates the DUT and runs the tests.

A test bench or test workbench is an environment used to verify the correctness or sanity of a design or model.

The term originated in the testing of electronic equipment, where an engineer would sit on a lab bench, hold measurement and manipulation tools such as oscilloscopes, multimeters, soldering irons, wire cutters, etc., and manually verify the correctness of the device under test (DUT).

In the context of software or firmware or hardware engineering, a test bench is an environment in which a product under development is tested with the help of software and hardware tools. In some cases, the software may require minor modifications to work with the testbench, but careful coding ensures that changes can be easily undone and no bugs are introduced.

Another meaning of "test bed" is an isolated, controlled environment, very similar to a production environment, but neither hide nor visible to the public, customers, etc. It is therefore safe to make changes as no end user is involved.

A device under test (DUT) is a device that has been tested to determine performance and proficiency. A DUT can also be a component of a larger module or unit called a unit under test (UUT). Check the DUT for defects to ensure the device is working properly. The test is designed to prevent damaged devices from reaching the market, which can also reduce manufacturing costs.

A device under test (DUT), also known as a device under test (EUT) and a unit under test (UUT), is a manufactured product inspection that is tested when first manufactured or later in its life cycle as part of ongoing functional testing and calibration. This can include post-repair testing to determine whether the product performs to the original product specifications.

In semiconductor tests, the device under test is a die on a wafer or the final packaged part. Using the connection system, connect components to automatic or manual test equipment. The test equipment then powers the component, provides stimulus signals, and measures and evaluates the output of the equipment. In this way, the tester determines whether the particular device under test meets the device specification.

In general, an RF DUT can be a circuit design with any combination and number of analog and RF components, transistors, resistors, capacitors, etc., suitable for simulation with the Agilent Circuit Envelope Simulator. More complex RF circuits will take more time to simulate and consume more memory.

AM Transmitter Basics You Should Know

The two types of AM transmitters used based on transmit power are:

The figure below shows the block diagram of the high-level and low-level transmitters. The basic difference between the two transmitters is the power amplification of the carrier and modulated signals.

Figure (a) shows a block diagram of an advanced AM transmitter.

Figure (a) is drawn for audio transmission. In high-level transmission, the power of the carrier and modulated signals is amplified before being applied to the modulator stage, as shown in Figure (a). In low-level modulation, the power of the two input signals to the modulator stage is not amplified. The required transmit power is obtained from the last stage of the transmitter, the Class C power amplifier.

The parts of Figure (a) are:

This is the output stage of the transmitter. The modulated audio signal and carrier signal is applied to this modulation stage after power amplification. The modulation occurs at this stage. The Class C amplifier also amplifies the power of the AM signal to the regained transmit power. This signal is ultimately passed to the antenna, which radiates the signal into the transmission space.

The low-level AM transmitter shown in Figure (b) is similar to the high-level transmitter except that the power of the carrier and audio signals is not amplified. These two signals are applied directly to the modulated Class C power amplifier.

The modulation occurs during this phase, and the power of the modulated signal is amplified to the desired transmit power level. The transmitting antenna then transmits the signal.

Coupling of output stage and antenna

The output stage of the modulated class C power amplifier feeds the signal to the transmit antenna. To transfer maximum power from the output stage to the antenna, the impedances of the two sections must match. For this, a matching network is required. The match between the two should be perfect at all transmit frequencies. Since matching at different frequencies is required, inductors and capacitors that provide different impedances at different frequencies are used in the matching network.

A matching network must be constructed using these passive components. As shown in Figure (c) below.

The double π matching network also filters out unwanted frequency components that appear at the output of the last stage of the transmitter. The output of a modulated Class C power amplifier may contain highly undesirable higher harmonics, such as second and third harmonics. The frequency response of the matching network is set to completely reject these unwanted higher harmonics and only the desired signal is coupled to the antenna.